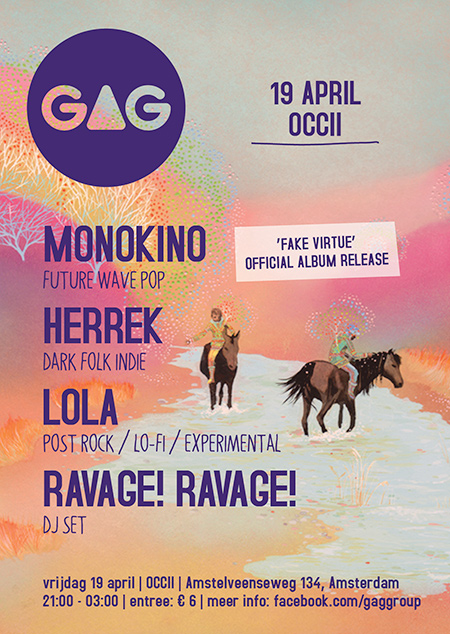 MONOKINO:
OFFICIAL ALBUM RELEASE ‘FAKE VIRTUE’
Monokino weaves ear-piercing synthesizers, cleverly arranged guitars and pounding drums with a highly-exceptional voice to produce futuristic sounding awe-inspiring pop. Their second album is called Fake Virtue, containing 11 innovative new songs which will be released on Modern Sky and My First Sonny Wiesmuller Recordings/Konkurrent. Although the album will be officially out on April 22, you can already get your copy at this show!
www.monokino.com
www.facebook.com/monokino

HERREK:
Herrek’s début album, Waktu dulu, zooms in on Van der Scheer’s years in Indonesia. Partly inspired by the contemporary Brooklyn-scene, but most of all doing their own thing, it is full of atmospheric, dark folk with haunting vocals and keys.Van der Veer used to be the guitarist in Adept (and continues to be the frontman of Bonne Aparte) but opts for a more personal approach with Herrek.
www.herrek.nl

LOLA:
Walking a tightrope between underground punk and dance music, LOLA makes cloaked anthems as likely as a brooding descent into some dark place at the back of your mind. Influenced by old lo-fi and organ driven recordings, ‘70s space age synths and John Barry or Ennio Morricone fuzziness galore, they have an atmospheric, alluringly, dark and haunting sound not too far removed from experimental bands like Portishead and Suicide.
www.facebook.com/pages/L-O-L-A/177991925649519