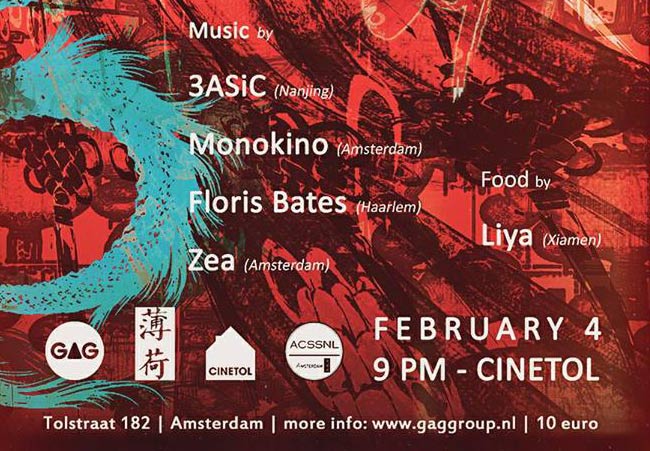 We have wrapped up Christmas, Hanukkah, and New Year and most of us are now hunkering down for the end of the Winter. To celebrate the arrival of spring, the Chinese host big family gatherings and participate in traditional folk celebrations with singing and dancing. In Amsterdam we’ll be doing something different:

Monokino is the first Dutch band to play inside China. Monokino’s albums have been released by China’s largest independent label ‘Modern Sky’. Monokino frequently participates in China’s growing music festivals, including performances at the Strawberry and Modern Sky music Festivals in Beijing and Shanghai. Monokino’s music embodies a free spirit that finds harmony with disparate elements and a pattern without a formula. This is music of the non-Conformist. Here, the dark and the light intertwine to make some really great tracks with great electronic elements.

Floris Bates’ songs seem to embody some sort of youthful cynicism, taking the piss out of society, celebrity culture and the usual societal struggles most of us are dealing with. Floris Bates is notorious for his catchy songs and nasty lyrics. Bates usually works out of his tiny bedroom apartment where he writes and records songs on old cassettes and computers, making use of what’s lying around. A debut album ‘Nasty Love’ is in the making and will see light in the spring of 2017.

Zea is the solo alias of Arnold de Boer, vocalist in The Ex; using a minimal set-up of guitar and sampler. Urgent lyrics over guitar, roughshod beats and grimy bass lines. This is fat-free music with no words wasted; joyfully obstinate, wonderfully bonkers. Zea gives us a bunch of avant-garde elements loosely structured – like a child’s play – just to build his sonic world.